Dorothy Morrison, Tracy Nelson, Annie Sampson and Angela Strehli, all highly regarded vocalists in their own rights, have joined forces as The Blues Broads. Reflecting more than two centuries of collective experience in blues, country, gospel and rock, the awesome aggregation is nothing less than a roots music “super group” of the first order. The Blues Broads, the group’s recording debut is a CD/DVD combination set, recorded live, that will be released by Delta Groove on September 18th.

Delta Groove Music president Randy Chortkoff stated, “I’m overjoyed to have these fabulously talented women join the Delta Groove family. They bring a history and commitment to the music I love, and I know they’re a perfect fit for our label.”

The Blues Broads CD/DVD includes both familiar songs associated with their respective august careers as well as newly written material that underscores the creative might of these four remarkable women. Each brings a unique perspective and history to the group that coalesced earlier this year under the aegis of Bob Brown, the album’s executive producer and whose Rancho Nicasio venue in Marin County serves as the Blues Broads’ unofficial home base. The DVD was directed by John Korty, the noted filmmaker, awarded both an Oscar and Directors Guild Award for the documentary Who Are the DeBolts? And Where Did They Get Nineteen Kids? and an Emmy for The Autobiography of Miss Jane Pittman. He called the Blues Broads “living testimony to the persistence and longevity of musical talent, proving the value of life experience in making art.” He added, “It was an honor to work with them.”

The start of Tracy Nelson‘s career in music dates back to the mid-1960s when she recorded an album of acoustic blues songs with Charlie Musselwhite’s backing for the Prestige label. After moving to San Francisco, she founded Mother Earth and rose to the front ranks of the era’s great female singers, sharing stages with the Grateful Dead, Janis Joplin, Jimi Hendrix and many more. She relocated to the outskirts of Nashville where her talents addressed country music in a most resonant way. She recorded with Willie Nelson and turned out a steady stream of blues and country-rooted albums into the new century. In 2011, Nelson signed on with Delta Groove Music and released the critically-acclaimed album “Victim Of The Blues” which received a Blues Music Award nomination for Traditional Blues Album of the Year. Of her alliance with Morrison, Sampson and Strehli in the Blues Broads she noted, “I love singning three-part harmony more than anything and the chance to sing with Annie, Angela and Dorothy is the ultimate of that. I’ve always loved Annie’s singing and fell in love with Angela’s perfect natural style at a funky little club in Austin. I developed my low notes singing along with Dorothy on the record of “Oh, Happy Day.”

As noted, Dorothy Morrison who rose to international renown as the lead vocalist on the Edwin Hawkins Singers hit “Oh, Happy Day,” the biggest selling gospel recording of all time, is now a Blues Broad in good standing. A member of the singing Combs Family, she rose to prominence in East Bay church circles and has been a force in gospel since the late 1960s. There is also a significant secular side to her career as she has worked with such notable artists as Van Morrison, Boz Scaggs, Delaney & Bonnie, Rita Coolidge, Merry Clayton and even Simon & Garfunkel — she’s heard on “Bridge Over Troubled Water.” Angela Strehli, long an admirer, recruited her to join the Blues Broads. Dorothy was initially conflicted about the offer, “At first I thought, ‘I’m a gospel singer, how can I do that?’ but then I realized there is God in all the songs, that music came from heaven. When Tracy suggested I bring “Jesus I’ll Never Forget” to the group that kind of sealed the deal.”

Angela Strehli whose lone star state roots are explored in a song she wrote for the group entitled “Two Bit Texas Town” had been one of Austin’s most highly regarded female vocalists prior to her move to the Bay Area in the 1990s. She was a fixture at Antone’s in Austin where she initially played a key role in that legendary club’s development. At Antone’s she was mentored and encouraged by many of the artists she booked including Muddy Waters, Otis Rush, Buddy Guy, Albert King, Stevie Ray Vaughan and Albert Collins and her love for the blues literally found a voice as she transitioned from the back office to the stage. Her collaborations with Lou Ann Barton and Marcia Ball were, in some way, a template for the Blues Broads concept. She noted, “I’m still as much of a fan as a performer. If it hadn’t been for Dorothy, Tracy and Annie and their inspirational voices and personalities I wouldn’t have done the work to realize this vision.”

Annie Sampson is a triple threat, bringing a rock, gospel and theater background to the Blues Broads. She played one of the leads in the original San Francisco production of Hair in the late 1960s and would go on to be a founder of Stoneground, the communal rock band that included Sal Valentino of the Beau Brummels in its line up as well as Cory Lerios, Steve Price and David Jenkins who would go on to form Pablo Cruise. Annie, like Dorothy, comes from a church background, has been part of recordings and performances by a host of notables including Taj Mahal, Maria Muldaur, Journey, Eddie Money, Elvin Bishop, Johnnie Johnson, Jerry Garcia, Elvis Costello, Sammy Hagar and others. She, like her fellow Blues Broads, expressed elation at being part of the Blues Broads project, “I’m having a wonderful time singing with these ladies whom I’ve admired for so long. What can I say? It’s a greats opportunity to blend my voice with those of some of my true idols.”

Keep In Touch With The Blues Broads 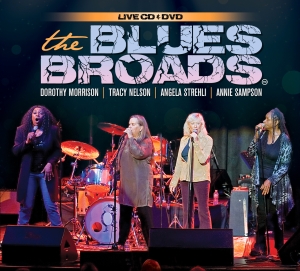